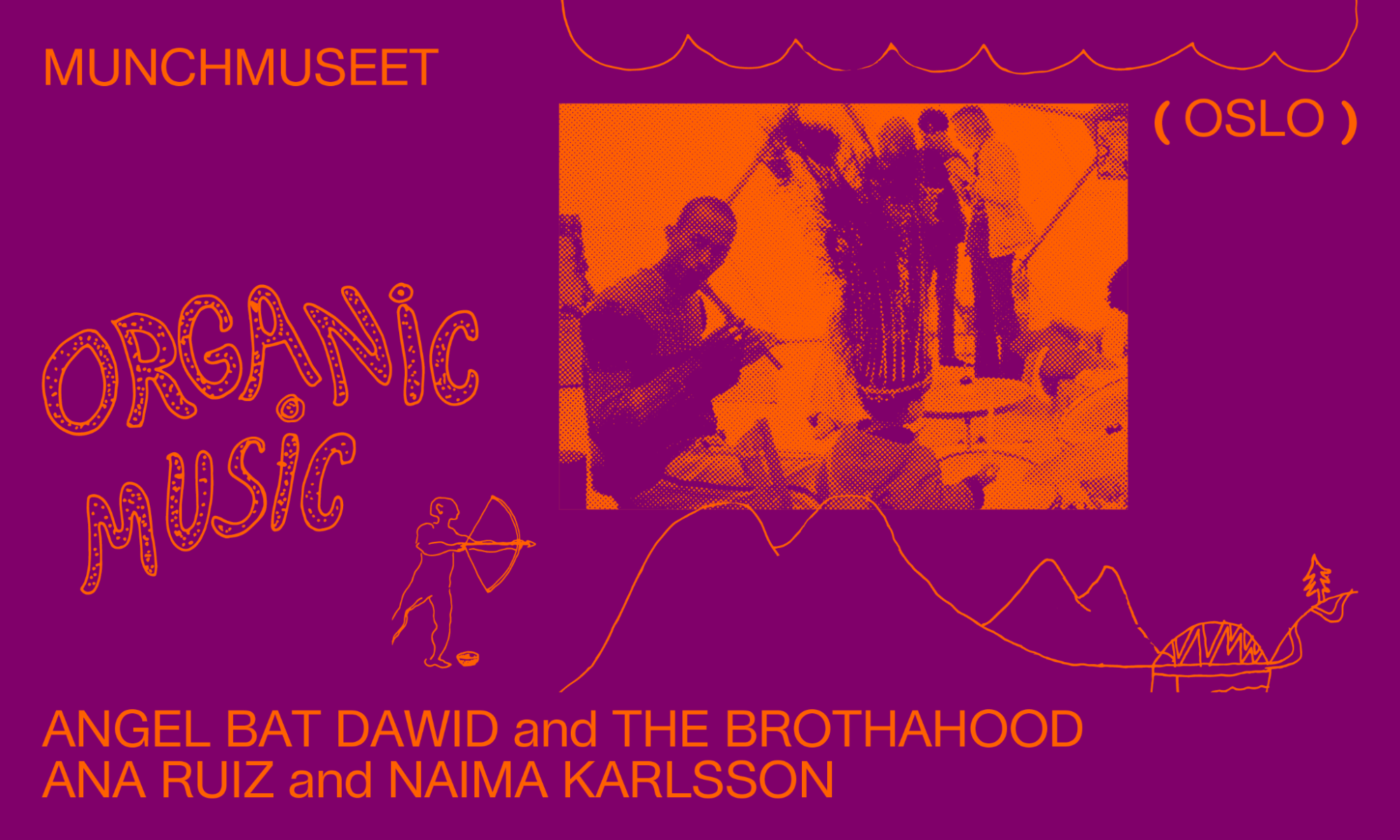 In concert with Blank Forms’s recent exhibition “Organic Music Societies: Don and Moki Cherry,” presented in New York from April 8 to July 16, 2021 and in Brussels at ARGOS center for audiovisual arts February 12th to May 1st, 2022, Blank Forms has organized a two-night program at the Munch Museum in celebration of the life, art, and collaborative spirit of free jazz legend Don Cherry and visual artist-designer Moki Cherry.

Angel Bat Dawid (b. Angel Elmore, 1979) is a multi-instrumentalist, composer, singer, educator, and a leading contemporary practitioner of Great Black Music, exemplified by her performances with her group, Tha Brothahood. Over the last half-decade, Bat Dawid has become a cornerstone of Chicago’s improvised music community, and an outspoken voice for racial equity and the musical history of Blackness. Though she’s most often associated with what many call spiritual jazz, Bat Dawid’s writing and recordings feature numerous strands of Black American Music and the many sound traditions of the African diaspora. Angel Elmore arrived in Chicago only as a teen, yet she has become deeply associated with the city’s long creative music tradition. She took up the clarinet in high school before studying music at Roosevelt University, but did not begin a full-time practice until 2014, joining the open music sessions led by saxophonist David Boykin at his Sonic Healing Ministries. It was there that Bat Dawid discovered the improvised music of the Association for the Advancement of Creative Musicians (AACM), which became her artistic beacon. Soon after, she co-founded the Participatory Music Coalition, convening young West and South Side improvisers, many of whom she continues to play and commune with in Tha Brothahood. A prolific composer, Angel Bat Dawid is a consummate bandleader and collaborator, always involved with innumerous bands and projects. In addition to Tha Brothahood, Bat Dawid is a member of Damon Locks’s Black Monument Ensemble, plays in the electronic duo called Daoui, the improvising trio Sistazz of the Nitty Gritty, and the ten-piece Chicago-and-Detroit-based band Autophysiopsychic Millennium, whose performances invoke the works and words of Dr. Yusef Lateef. Outside Chicago, Bat Dawid’s many collaborators have included members of the Sun Ra Arkestra and the German post-rock group the Notwist, the British jazz group Sons of Kemet, and the South African electronic duo dumama + kechou.

The cross-generational bond that unites influential improviser/pianist Ana Ruiz (b. 1952), and visual artist, archivist, musician Naima Karlsson (b. 1982) is the musical spell cast on each by Ruiz’s mentor and Karlsson’s grandfather, the legendary trumpeter Don Cherry. Ruiz was already a prominent cultural figure in Mexico City when she helped arrange Cherry’s arrival there in February 1977 to play and teach his Organic Music Workshop. In 1973, Ruiz had co-founded the trio Atrás del Cosmos [Behind the Cosmos] with Henry West and Robert Mann, Mexico’s pre-eminent (some say, only) free-jazz group, which cultivated an extended ensemble by mentoring other young improvisers, producing DIY happenings that functioned as the nerve center of the city’s avant-garde arts community, and which in turn helped power Atrás del Cosmos’s own “co-creations.” Performing with Don and staging workshops with Moki Cherry, Ruiz and the Atrás del Cosmos collective internalized, then broke open the template of so-called free jazz, absorbing Mexican folk music and other global forms. In the process, they helped pass on these strategies to a generation of Latin American musicians and artists; and Ruiz has continued using these ideas throughout her career as a multivalent educator, composer for film and dance, and recording artist. Karlsson also applies Don and Moki’s Organic Music philosophies in the music she makes within the electroacoustic improvisation group Exotic Sin, and in other creative projects, imagining sound as part of an interdisciplinary art practice and as a language reflecting environments both imaginary and real. Karlsson connected with Ruiz in 2021, studying with her grandfather’s protege in Mexico and participating in both duo and large band performances.

Munchmuseet is fully accessible for those with disabilities.