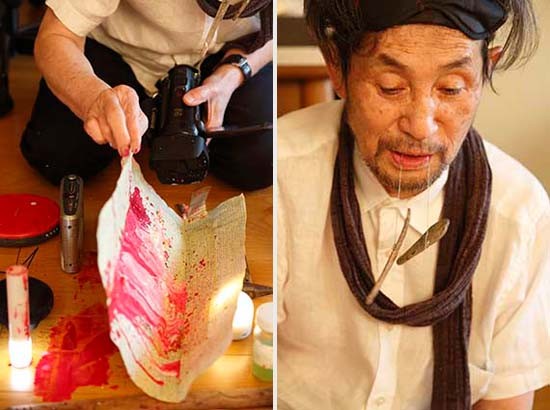 In performance, Gozo Yoshimasu’s language is incantatory and strange. He breaks down Japanese into phonemes, counterpointed sonic progressions, and rhymes. Often, he’ll include fragments of English, French, Chinese, Okinawan or Korean and, on paper, he uses multiple scripts—romanji, Korean hungul, and invented man’yo-gana and pictographs as well as normal Japanese kanji, hiragana, and katakana. All together, they function like stacked chords in a musical composition, creating harmonic complexes through which three or more melodic lines can be tracked.

Much of Gozo’s performative writing, along with the films he makes called gozoCiné, comprise the record of a never-ending conversation with the dead. For Gozo, all language, but especially poetry, is memorial. Since the 3-11 disaster in Japan, that complex of catastrophes— the earthquake, tsunami, and radiation leak that caused more than 20,000 deaths and forced the evacuation of 280,000 people—Gozo has felt called to “live as a poet.” What this means for him is to cultivate a constant vulnerability, an ongoing receptiveness. It is an ethical stance.

Gozo Yoshimasu, considered one of the most representative figures of Japanese modern literature, has published over thirty books of poetry—among them works that have been available in several languages—since the release of his first book of poetry in 1964 at the age of twenty-five. His poetry, which he challenges himself to constantly reinvent and reinvigorate, chronicles a tireless pursuit of origins. He also explores the idea of always being in movement. As a traveler his itineraries initially followed those of the great 17th century Japanese poet Basho and then widened to a more personal ‘pilgrimage’ from the isles of Japan to the American desert, to Central Asia and the common streets in most continents in the world. It’s no wonder that this constant movement—walking, driving, traveling by train or boat—is one of the foundations of his poems, giving them a sense of rhythm and speed in “the pursuit of his desire to go far away” (from his poem Weaver Girl). He has also developed his poetry into other forms of artistic expression. As a performer, he has cultivated a unique style of recitation, and uses rhythm and vocal modulation to the extent that one might consider it a form of incantation. His readings have been called “electrifying revelations of the power of poetry to move the heart and mind without the air of translation.”

This presentation is made possible in part with public funds from the New York State Council on the Arts’ Electronic Media and Film Presentation Funds grant program, administered by The ARTS Council of the Southern Finger Lakes.