Jerry Hunt's Procession and The Death of the Piano 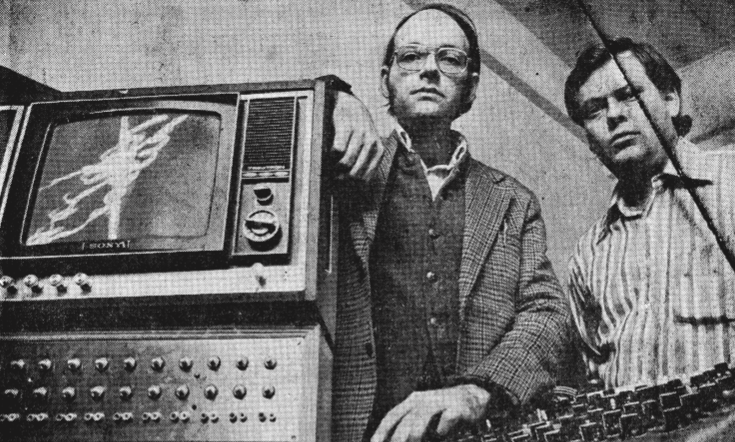 On the occasion of Jerry Hunt: Transmissions from the Pleroma, the first institutional exhibition of the composer-performer’s videos and sculptures, on view at Blank Forms through June 11th, Light Industry presents a selection of works featuring Hunt’s early experiments with audio-visual synthesis, a performance-lecture for public-access television, and his incidental music for hire.

Hunt was a pioneering figure in the development of electronic composition and new music in America, recognized for his kinetic live performances that fused densely layered computer music with object theater and intimations of the occult. Hunt lived in Texas for his entire life, residing in an adapted barn outside of Canton for the majority of his career, but he amassed a small yet dedicated following in Europe and across the United States. Television and video were through-lines in the composer’s career, both as media and as conceptual influences. Hunt performed his work on local TV broadcasts as early as 1965, and his curiosity in music as an expanded form led to his embrace of nascent abstract video. An avid watcher, Hunt was known to explain the sonata form by way of comparison to the episodic structure of I Love Lucy. Later in life, Hunt endeavored to make work for home television, including pieces for interactive video-disc and a proposed opera about “Lady Bird” Johnson with Karen Finley, ambitions that were cut short by his death at age forty-nine.

Beginning in 1970, Hunt and video artist David Dowe directed the Video Research Center at Southern Methodist University in Dallas, part of a national network of satellite labs set up by San Francisco’s National Center for Experiments in Television (NCET). Located in an underground space beneath the school’s football bleachers, the studio supported Hunt and Dowe’s home-brewed equipment design and live audio-visual collaborations, which often utilized image-processed dancers, color manipulation, and live, improvised electronic music. One such work titled Procession (1973), described by Dowe as a “graphic ballet of time and motion,” was aired on public television alongside a jaunty tour of the Center’s facilities.

When the Center disbanded due to lack of funding in 1975 Dowe found work at the local television station KERA-TV where Paul Bosner—co-creator of the musical variety show Austin City Limits, and husband of modern dance choreographer Toni Beck, for whom Hunt worked as an accompanist—was a producer. In 1977, Bosner directed The Death of the Piano, a recording of a recital-lecture Hunt delivered in the parlor room of his long-time patrons Paul and Oz Srere. A humorous survey of modernist piano technique, the video premiered on KERA and was intended for a general audience. It demonstrates Hunt’s loquacious explanatory style and offers insight into his key works, including Cantegral Segment(s) (1973–93), and some of his musical touchstones, such as Alexander Scriabin and Toshi Ichiyanagi. The lecture also signaled a significant shift in Hunt’s work: a prodigious pianist, the composer became frustrated by the limitations of the keyboard and all but abandoned the instrument shortly after the airing of the video.

In the 1980s, Dowe and Bosner began producing educational and industrial videos and often conscripted Hunt to supply incidental music—a key source of income for the notoriously frugal composer who once boasted of living off “an annual income of $15.” Through his association with the two producers, Hunt served as the music director of With Ossie and Ruby (1980–82), a variety show hosted by Ossie Davis and Ruby Dee, and composed synthesized music for a wide range of programs including community college telecourses, a docuseries hosted by Bill Moyers, and the documentary Imagining Indians (1992) directed by Hopi filmmaker Victor Masayesva Jr. This screening will also include a brief compilation of Hunt’s plucky electronic scores for educational tapes and public TV shows.

This event is co-organized by Blank Forms and Light Industry.