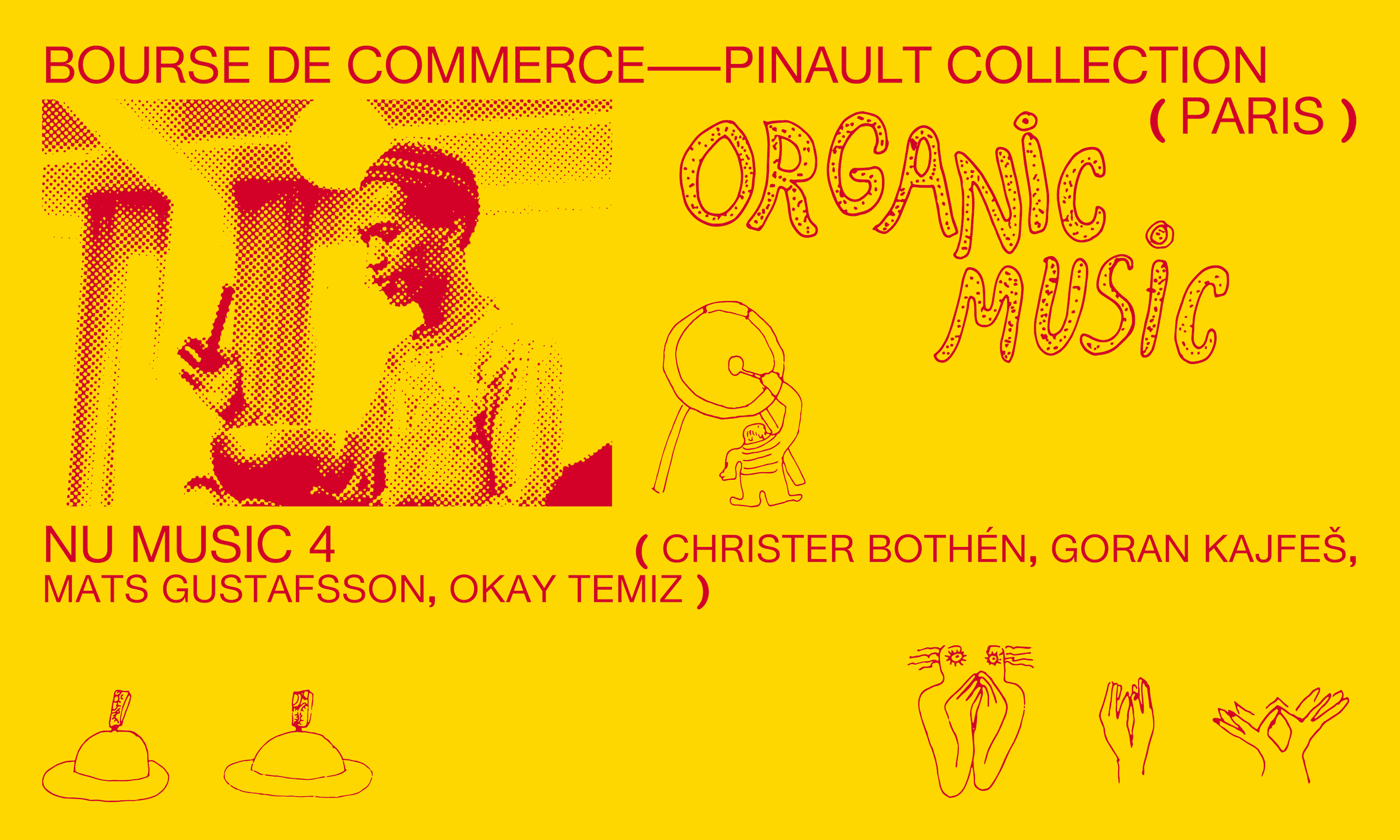 Performing under the moniker NU Music 4 for the first time, Mats Gustafsson and Goran Kajfeš join former Don Cherry collaborators Christer Bothén and Okay Temiz as a new quartet, sprung from a vibrant and cross-cultural array of styles, instruments, and sounds. NU Music 4 takes its cue from the open-ended possibilities of Cherry’s “collage music,” synthesizing global cultures and styles through organic and improvisational play. The quartet will perform their own original suites and compositions alongside works by Cherry and others, all coalescing and dispersing as spontaneous and unbounded forms influenced by free jazz, radical rock, and traditional music from across North Africa, Turkey, Brazil, Scandinavia, and elsewhere. With its exuberant and motley arrangement, NU Music 4 and its members strive for an open music rooted in curiosity, camaraderie, and togetherness. A legendary Turkish percussionist who helped spark interest in non-Western music across Europe, Okay Temiz moved to Sweden in the mid-1960s, where he performed duos with Cherry and often as a trio with Cherry and South African bassist Johnny Dyani. In the 1970s he formed the widely-acclaimed Oriental Wind ensemble, and, since returning to Turkey in the late 1990s, he has continued to shape global sounds through his records, collaborations, and workshops. Christer Bothén is a key figure in the Scandinavian creative scene, traversing free jazz, folk, and experimental music. He met Cherry in the early 1970s and even taught him to play the donso ngoni, an instrument Bothén learned while living with Malian hunters and which will feature in NU Music 4’s debut. In his more recent collaborative output, Bothén has participated in and led an array of iconic ensembles, including the Bitter Funeral Beer Band, his Bolon Bata group, and its later Bolon X iteration. Completing the quartet are two driving forces in Scandanavian and international creative music: Mats Gustafsson, a beserk Swedish saxophonist, flutist, and pioneering member of The Thing, Fire!, and the NU ensemble; and Goran Kajfeš, the famed Croatian-Swedish trumpeter known for his Subtropic Arkestra, and  his work in the jazz groups Oddjob, Nacka Forum, and Tropiques.

“Organic Music Societies” is supported by the Nordic Culture Fund, The Andy Warhol Foundation for the Visual Arts and, in part, by public funds from the New York City Department of Cultural Affairs in partnership with the City Council.