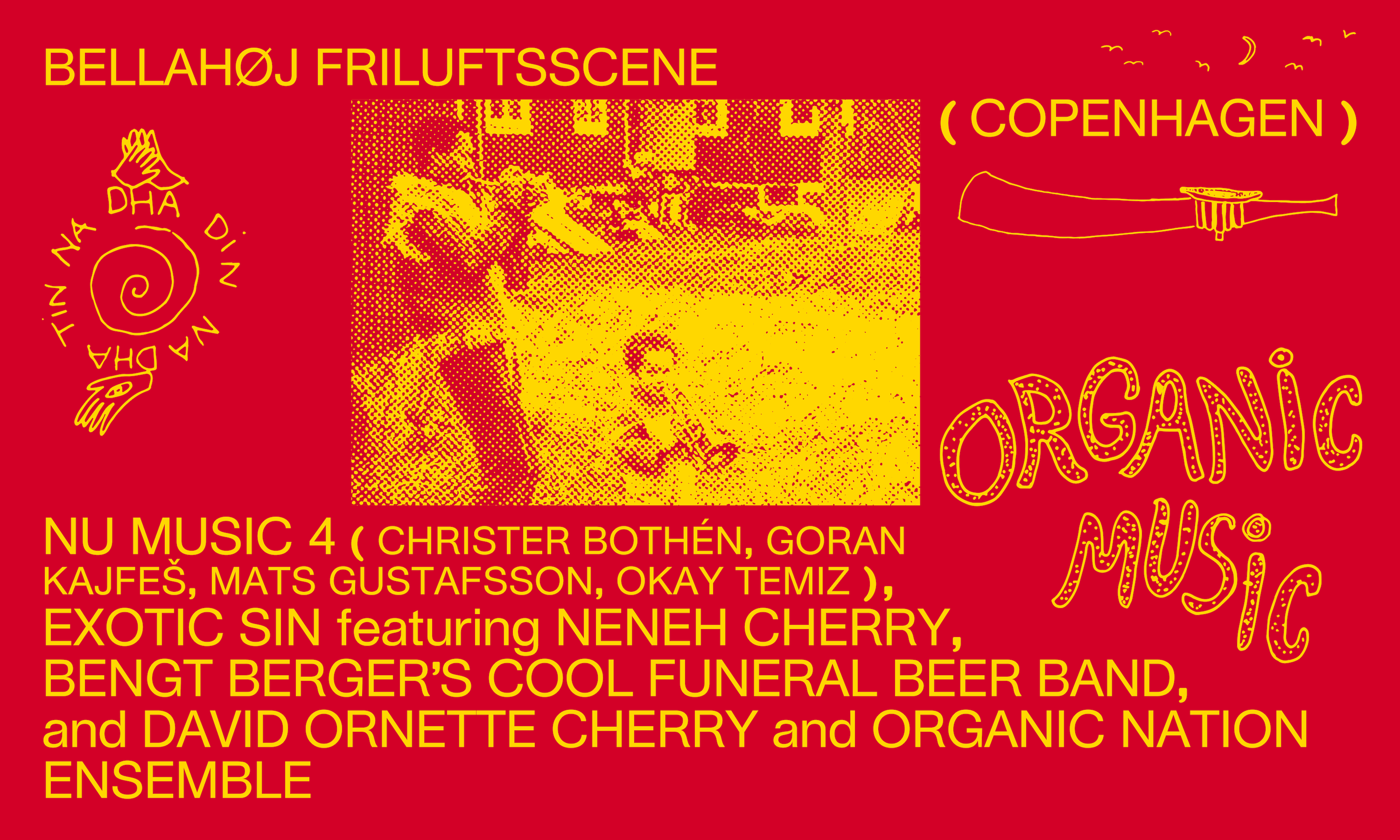 In concert with Blank Forms’s recent exhibition, “Organic Music Societies: Don and Moki Cherry,” presented in New York from April 8 to July 16, 2021, Blank Forms has organized a series of programs at Bellahøj Friluftscene in celebration of the life, art, and collaborative spirit of Don and Moki Cherry.

Performing under the moniker NU Music 4 for the first time, Mats Gustafsson and Goran Kajfeš join former Don Cherry collaborators Christer Bothén and Okay Temiz as a new quartet, sprung from a vibrant and cross-cultural array of styles, instruments, and sounds. NU Music 4 takes its cue from the open-ended possibilities of Cherry’s “collage music,” synthesizing global cultures and styles through organic and improvisational play. The quartet will perform their own original suites and compositions—alongside works by Cherry and others—that coalesce and disperse as spontaneous and unbounded forms, influenced by free jazz, radical rock, and ethnic music from across North Africa, Turkey, Brazil, Scandinavia, and elsewhere. With its exuberant and motley arrangement, often incorporating solo, duo, and trio play, NU Music 4 and its members strive for an open music rooted in curiosity, camaraderie, and togetherness. A legendary Turkish percussionist, Okay Temiz moved to Sweden in the mid-1960s and helped spark interest in non-Western music there and beyond. He performed with Cherry, and as a trio with South African bassist Johnny Dyani, over the next decade; formed the widely-acclaimed Oriental Wind ensemble; and, since returning to Turkey in the late 1990s, has continued to shape global sounds through his records, collaborations, and workshops. Christer Bothén is a key figure in the Scandinavian creative scene, traversing free jazz, folk, and experimental music. He met Cherry in the early 1970s, and even taught him the traditional Mali donso n’goni, an instrument Bothén learned to play while living with Malian hunters—and that will feature here in NU Music 4’s debut. In his more recent output, Bothén has, among solo ventures, participated in and led an array of iconic ensembles, including the Bitter Funeral Beer Band, his Bolon Bata group and its later Bolon X iteration, alongside a range of collaborations. Completing the quartet are two driving forces in the Swedish and international creative jazz and improvised music scenes: Swedish berserk saxophonist and flutist, and member of The Thing, Fire!, and The NU - ensemble, Mats Gustafsson, and the Croatian-Swedish trumpeter, and player in Oddjob, Nacka Forum, Subtropic Arkestra, and Tropiques, Goran Kajfeš.

With a contorted, cosmic sound that fuses the free-form expressions of spiritual jazz with the compositional strategies of classic minimalism, Exotic Sin—comprised of visual artist, archivist, and musician Naima Karlsson and multi-instrumentalist and improvisor Kenichi Iwasa—revels in the exhilaration of sonic contrast, all-the-while expanding the creative and instrumental output of Karlsson’s forebears, free jazz legend Don Cherry and visual artist-designer Moki Cherry. Initially joined in a tribute to Don and Moki, Karlsson and Iwasa subsequently formed Exotic Sin, redeploying the material legacy of Don—playing his trumpet and jerry-rigged “zen saxophones” alongside their own instruments, synthesizers, and Iwasa’s Yamaha keyboard—to make a sound entirely their own. Their commitment to tonal and stylistic juxtapositions, and their interdisciplinary roots, continues and updates the synergistic approach that defined Don and Moki’s art and life. In this special performance, Neneh Cherry—mother to Karlsson, daughter of Don and Moki, and pioneering singer and post-punk performer—will share the stage with Exotic Sin.

The next iteration of Bengt Berger’s acclaimed Bitter Funeral Beer Band, Cool Funeral Beer Band brings together a brew of international musicians in pursuit of a truly multicultural sound. In the 1960s, Sweden became fertile grounds for a number of musical intersections across jazz, rock, folk, and electronic music, and Berger was at the center of it all. A percussionist, composer, and ethnomusicologist, Berger was an early participant in Sweden’s left political progg movement before traveling to India to learn Hindustani and Carnatic music. His travels led to his performing with dhrupad musician Ustad Zia Mohiuddin Dagar, and to the production of important records by him. In the ’70s Berger played with Don Cherry (notably on his Organic Music Society LP) and devoted lengthy periods to studying West African music, particularly that of Ghana’s northern region. He learned Ewe drumming from Doe Kushiator in Accra, where he also studied with Kakraba Lobi, a Lo-Birifor master of the kogyil, an African xylophone made with gourd resonators. Back in Sweden in 1980, Berger assembled a group of his countrymen—including members of Archimedes Badkar and Spjärnsvallet, two experimental fusion groups he had played with in the ’70s, and Pärson Sound, the influential psychedelic group with whom he recorded in the late ’60s—whom he trained in various aspects of West African traditions, naming them the Bitter Funeral Beer Band after the drink brewed as part of the Lo-Birifor funerary rites on which Berger based the band’s improvisations. Cool Funeral Beer Band unites previous Bitter Funeral Beer Band players and new collaborators alike, including Berger, Mats Äleklint, Lars Almqvist, Robin Cochrane, Signe Dahlgren, Marque Gilmore, Thomas Gustafsson, Peter Janson, Sir Thomas Jäderlund, Jonas Knutsson, Sigge Krantz, Sten Källman, Marianne Nlemwo Lindén, Emmanuelle Martin, Lise-Lotte Norelius, Viktor Reuter, and Staffan Svensson.

Helmed by David Ornette Cherry, the Organic Nation Ensemble brings together participants from Cherry’s four-part workshop series on the art of listening, improvising, sound, and his father, Don Cherry. The two-day program will inspire participants to rediscover their creativity, encouraging them to play and interact with one another in new ways while learning different approaches to rhythm, dynamics, and form. Fresh off the heels of their workshops, the newly-established ensemble will make its debut as the opening act for Bengt Berger’s Cool Funeral Beer Band.

“Organic Music Societies” is supported by the Nordic Culture Fund, The Andy Warhol Foundation for the Visual Arts and, in part, by public funds from the New York City Department of Cultural Affairs in partnership with the City Council.