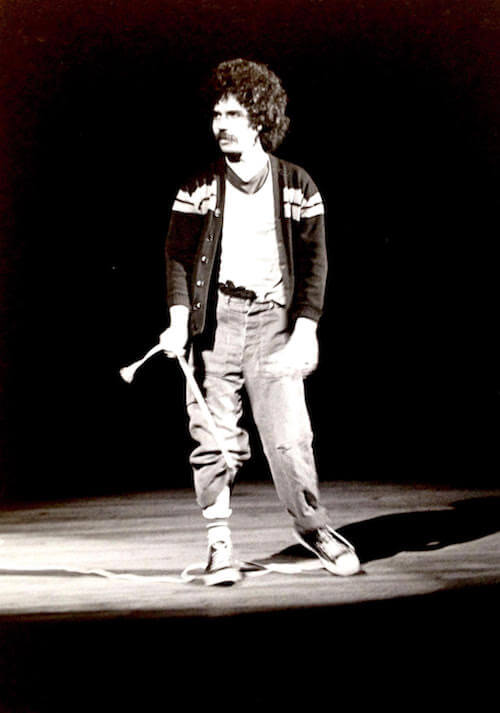 See unseen and rarely screened video documentation of Steven Robert Snyder AKA Ralston Farina's Zeitkunst AKA "Time Art." Ralston Farina’s performance practice went largely undocumented, verging on near obscurity due to his own apprehension towards documentation. Farina's work draws equally on the slapstick comedy of Ernie Kovacs and the phenomenologically informed philosophical investigations of Alfred Korzybski. His use of durational, repetitive, and absurd strategies points less towards the immediate and more towards the deep recesses of memory. The transmission of meaning through performative actions takes a back seat to subliminal gestures, which unfold in the audience's memory over time. Thus the repeatability of video is somewhat antithetical to his practice.

The screening will include all of the known existing videos documenting Farina’s performance - believed to be created for grant application - as well as a never before seen animation entitled STEVE RAVEN RAVENOGRAPHY.

Ralston Farina is an angry man who came too early and stayed too late. As a vagabond without home or tangible art, his dependence for a shelter and his fleeting activities asserted him into the serious sixties as a pushy, nostalgic weirdo with very warm, friendly and funny art. Remember this was before friendlyism and way before the sixties artists ever smiled, and before the absence of credible movements turned attention to the eccentric loner type. Ralston, who for years and years did just what he felt like, depending on word of mouth rather than hustle, just as the curio individuals who never bothered wearing the formal tie of mainstream art came out, suddenly is no longer a loner but an archetypal image, a source and living, working example of what this performance thing might be about to a whole herd of new generation artists who perform as artform, not that they know it. Ralston, as one could expect by now from this wizard, predated all this present eclectica and esoterica -- not that Ralston is the pioneer type who cuts or plants new ideas leading the work as idée fixe; no, Ralston is an eclectic container who mixes all the puzzle parts into ragout ready-to-eat: entertainment, fun, having style-as-style, funk, schlock, ‘50s watered-down memorabilia-pop, cute consumerism (as social content, note his name), vaudeville, showbiz, magic, o yes and laughs too (even though John Cage was only seen silently giggling himself to death) and there are many intermissions because he works many and short. - from Art Rite

STEVE RAVEN RAVENOGRAPHY (?, 15 min, video)
A collection of painted images by Farina that accompanied his performances as Steve Raven.

TIME//TIME (1977, 24.5 min, video)
The audience is amazingly quiet in this performance which features Ralston painting (in disco) using a can of Campbell’s soup and Elvis performing “Rock a Hula Baby” projected on the wall; it was taped in Antwerp, most likely at the Museum van Hedendaagse Kunst.

RUBBER NOVEMBER #1 (1975, 17 min, video) & RUBBER NOVEMBER #2 (1975, 24 min, video)
Excerpts from what might have been a series of performances at the Holly Solomon Gallery in November 1975. The camera seems disoriented, but in #1, Ralston appears to be sharing the bill with Taylor Mead, who reads from and riffs on DEAR THEO.

RANDOM EYE-ROLLING EXERCISES FOR AESTHETIC IMMORTALITY (1978, 26.5 min, video)
Object theater at its purest, this manic one-man show using a slide projector as a spotlight, was recorded at 112 Greene Street, on the evening of April 1, 1978.