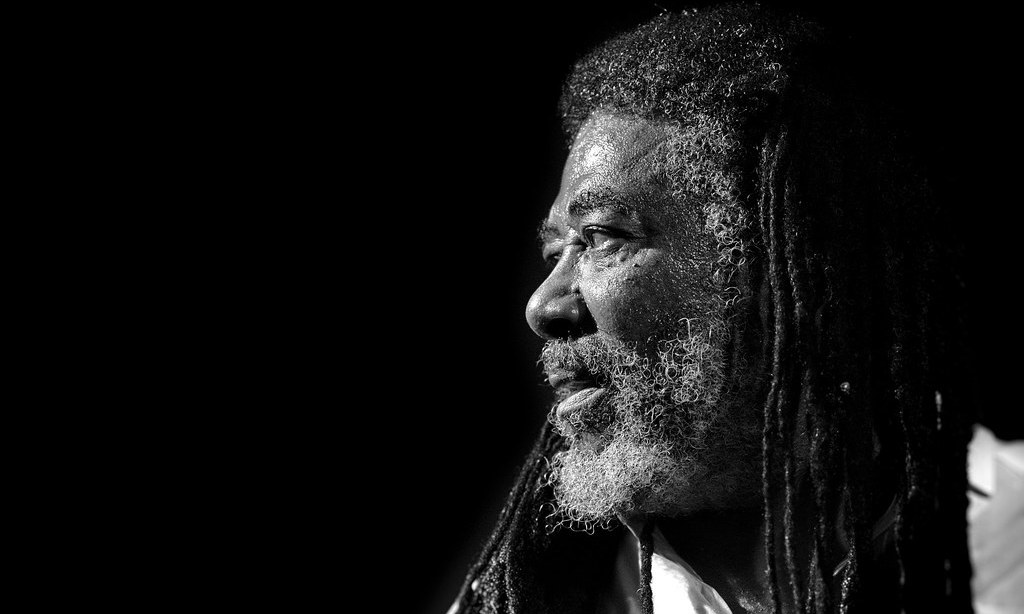 Wadada Leo Smith (b. 1941, Leland, Mississippi) is a trumpeter, multi-instrumentalist, composer, and ardent proponent of Creative Music. A member of the AACM (Association for the Advancement of Creative Music) for over five decades, Smith was a cofounder of the Creative Construction Company and Creative Improvisors Orchestra, has taught at Creative Music Studio as well as Bard College and Cal Arts, and in 1971 founded Kabell Records to release his solo debut Creative Music - 1. Rejecting improvisation as understood within the energy field of jazz music, Smith has pursued a more systemic, thematic method for manifesting the creative process. His Ankhrasmation Symbolic Language—which combines the Egyptian word for “vital life force” (“Ankh”), the Amharic word for “head” or “father” (“Ras”), and a universal word for mother (“Ma”)—is a system of graphic notation first realized in 1967 which demands an openness and engagement inextricable from Smith’s spiritual understanding of radical democratic politics. Its consideration of each performer as an autonomous creative unit proliferates the otherwise central conception of creative dominance, valorizing individual expressive voices as simultaneously independent and non-reactive elements of a “divine life force.” The consequent music bears Smith’s signature use of space and silence, elemental in its graciously unfolding gestures. Smith has lent his playful, dry, penetrating tone to sessions with a who’s who of creative and free music, including Cecil Taylor, Don Cherry, Joseph Jarman, Ikue Mori, Derek Bailey, Jeanne Lee, Charlie Haden, Carla Bley, and Marion Brown for the esteemed FMP, Tzadik, Black Saint, and ECM labels. His recent projects have been overt in their sociopolitical leanings, with Cosmic Music focusing on “the issues of borders, refugees, and immigrants,” Tabligh “[dealing] with the issue of the way people look at Islamic ideas and people in Islam” and Ten Freedom Summers taking a panoramic look at the Civil Rights movement with pieces dedicated to Emmet Till, Rosa Parks, and Thurgood Marshall.

Pheeroan akLaff (b. 1955) is a jazz drummer and regular collaborator of Smith’s who has appeared on 9 of his recordings, including 1979’s Spirit Catcher and 2012’s Ten Freedom Summers. Born and raised in Detroit to parents who gave their seven children music lessons, akLaff was given the opportunity to study with Randall Hicks and “Pistol” Allen before a mentorship with multi-instrumentalist and arranger Travis Biggs led to his first recording session, for soul singer Emanual Lasky’s “Remember Me Always.” He cut his teeth playing jazz alongside musicians of the Strata collective before moving to New Haven, where he served as a member of Smith’s New Dalta Ahkri. The inspired polyrhythms and chanting of his 1979 solo debut for percussion and voice House Of Spirit: Mirth remains a sought-after document of creative music by collectors and was excerpted by Soul Jazz Records for their Freedom, Rhythm & Sound compilation of revolutionary jazz. akLaff has additionally led the Double Duo ensemble with Rashied Ali, been a member of Air, and worked with Cecil Taylor, Sonny Sharrock, Amiri Baraka, Amina Claudine Myers, Mario Pavone, Andrew Hill, and countless other jazz music luminaries. He currently teaches at Wesleyan University and in 2005 founded Seed Artists, a non-profit organization that uses creative music to bridge gaps between generations and cultures, promote community involvement, and expand musical education among schoolchildren.

Akira Sakata (b. 1945) is a veteran Japanese free jazz alto saxophonist as well as a marine biologist, television and film actor, and writer. Sakata entered the international stage as a member of the explosive Yamashita Yosuke Trio from 1972 to 1979 before striking out on his own as a leader and creating a heterogeneous body of work that has touched on electronic music, pop, and Japanese folk, including sessions for Enja Records and three LPs for the now coveted Better Days label. He has lent the swagger of his blistering reed phrasing to collaborations with the likes of Last Exit, Jimmy Lyons, Hamid Drake, Keiji Haino, Peter Brötzmann, Hijokaidan, Urban Sax, and Charles Hayward, but his performances can also distinguished by his idiosyncratic use of his voice. 2001’s Fishermans.com, Sakata’s ode to folksongs of the sea, finds him alternating between sultry alto lines and possessed vocal ululation, its dark mutant funk featuring no less than legendary fusion-era Miles Davis guitarist Pete Cosey in his first recorded session since his 1983 contribution to Herbie Hancock’s Future Shock. Continuing the immaculate pedigree of his collaborations, Sakata in 2005 began performing with Chikamorachi, the agile duo of drummer Chris Corsano and bassist Darin Gray, marking a fruitful return to his incendiary free jazz roots. Occasionally expanded by contributions by Jim O’Rourke, Min Tanaka, Merzbow, or Keiji Haino, the trio has cut 6 records to date, including 2018’s Proton Pump.