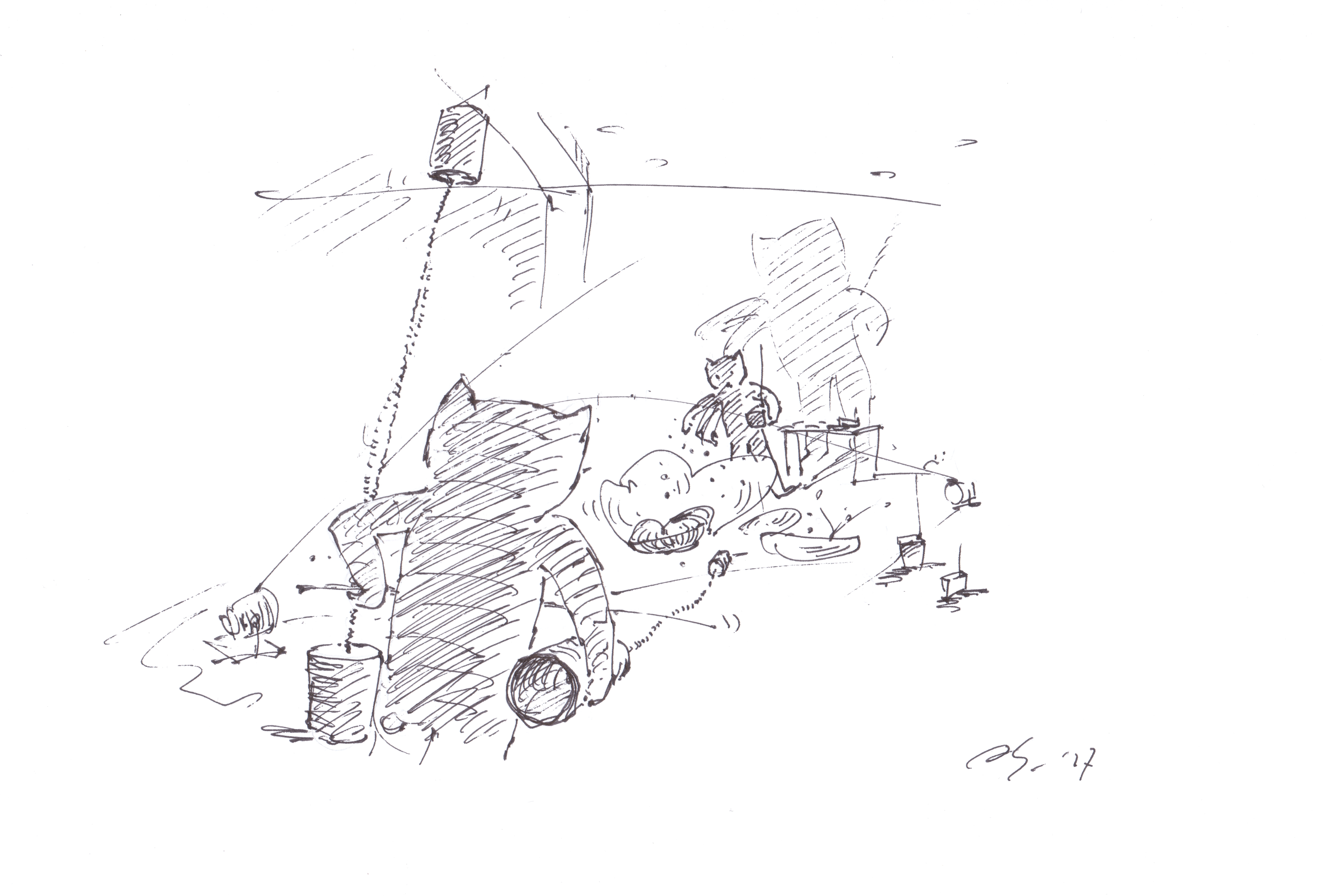 Though they differ in generation and performance practice, Aki Onda (b. 1967) and Akio Suzuki (b. 1941) share an astonishingly inventive, open-ended, and spontaneous approach to the infinite and variegated possibilities of sound as a spatial phenomenon. Since initiating a collaborative relationship in 2005, the duo have embarked on a number of tours in Europe and Asia, exploring locations ranging from an abandoned factory on the outskirts of Brussels to an underground parking lot in Glasgow. Onda and Suzuki perform by utilizing unconventional and self-made instruments including analog cassette Walkmans and radios, found pieces of wood, nails, hammers, buckets, marbles, and glass jars, allowing the individual architecture and acoustics of various sites to guide the flow and development of performance. For this final stop of their six-city North American tour, Suzuki and Onda will debut a collaboration with New Zealand-born American composer and sound artist Annea Lockwood. The three artists will present a new collaborative work, examining the possibility of using found objects both as visual and sound tools, accompanied with live video projections of Brooklyn-based filmmaker Motoko Fukuyama, followed by a duo performance by Suzuki and Onda.

A composer with an unusual sensitivity to the poetic potential of untreated acoustic sound, Annea Lockwood’s fascination with timbre has yielded a range of environmental installation, performance art, text-sound work, tape music, and concert pieces that strive for “the imitation of nature in her manner of operation”. Born in New Zealand in 1939 and living in the US since 1973, Lockwood first became known for her Glass Concert, in which she bowed, struck, spun, and shattered pieces of glass, presenting each facet of the material in isolated succession as a piece of music in itself. Her sound maps of rivers—the Hudson, the Danube, and the Housatonic—follow suit, serially documenting the rich sonic variety of each river with audio snapshots of texturally significant sections that crossfade as they travel downstream. Rooted in a belief in the complexity that deep listening can reveal within seemingly simple sounds, Lockwood’s interest in environmental serenity also extends to her work recording others’ spoken life narratives, drawing upon her ‘60s collaborations with sound poet Bob Cobbing. Recent works include In Our Name, for baritone Thomas Buckner, cello and sound files, based on poems by prisoners in Guantánamo; Water and Memory, for the Holon Scratch Orchestra; and Wild Energy, a collaboration with Bob Bielecki, a multi-channel site-specific installation focused on geophysical, atmospheric, and mammalian infra and ultra sound sources.

Aki Onda is a composer, performer, visual artist, and curator born in Japan and currently residing in New York. He is best known for his Cassette Memories, sound tapestries culled from a diary of field recordings ceaselessly collected with a cassette Walkman over the past quarter century. Onda allows his documentation to accumulate before drawing from it, deliberately stripping his archive of personal significance as time weathers particular associations into the universal. Manipulating multiple Walkmans as instruments in performance, the resulting collages expose the architecture of memory through a cinema for the ear that owes as much to Jonas Mekas as it does Luc Ferrari. Onda often works in interdisciplinary fields and collaborates with filmmakers, visual artists, and choreographers. His ongoing projects include "Nervous Magic Lantern" with Ken Jacobs, an improvisation trio with Michael Snow and Alan Licht, and visual-sound installation/performance with Raha Raissnia.

Akio Suzuki is a Japanese artist whose work has foregrounded the act of listening since a 1963 performance contemplating the sounds of a bucket of junk thrown down a flight of train station stairs. Often considered a sound shaman or “quester after sound and space”, Suzuki’s minimal interventions penetrate equally into natural and industrial contexts, opening perceptive spaces and unveiling acoustic subtleties lying dormant everywhere. For 1988’s Space in the Sun Suzuki spent a year in the mountains of Kyotango building a permanent structure out of his own handmade bricks before finally dedicating one full day to listening to the sounds reflected between its two open-air walls. His ongoing oto-date project playfully leads participants on soundwalks through urban landscapes marked with stencils of hybrid ear-feet that designate listening points distinguished by their exceptional sonic phenomena. Suzuki is also an accomplished instrument builder whose spiral echo instrument Analapos and glass harmonica De Koolmees have graced both solo recordings and improvisations with the likes of Takehisa Kosugi, Derek Bailey, Peter Brötzmann, and Steve Lacy.

Annea Lockwood: Sound in Nature and the Nature of Sound