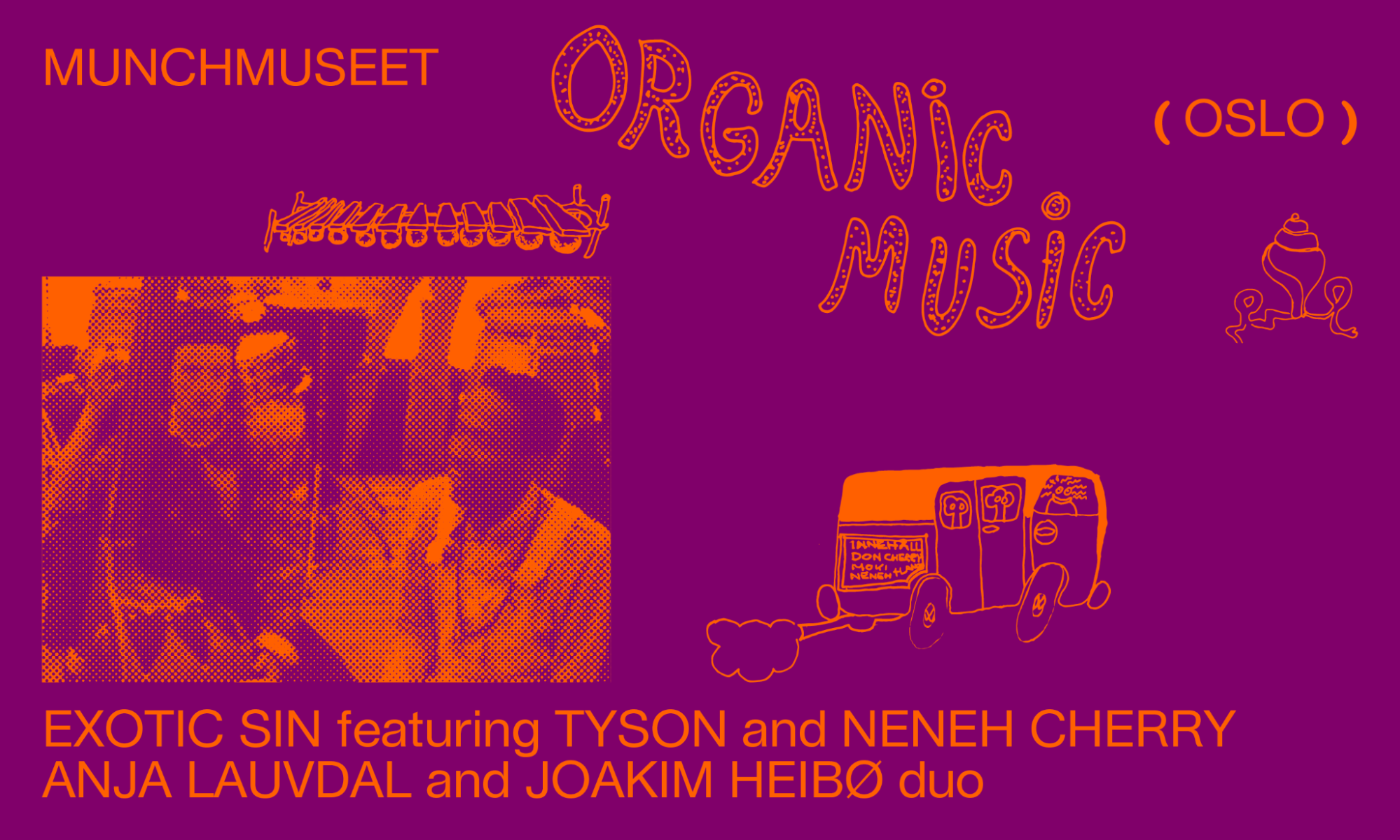 In concert with Blank Forms’s recent exhibition Organic Music Societies: Don and Moki Cherry, presented in New York from April 8 to July 16, 2021 and in Brussels at ARGOS center for audiovisual arts February 12th to May 1st, 2022, Blank Forms has organized a two-night program at the Munch Museum in celebration of the life, art, and collaborative spirit of free jazz legend Don Cherry and visual artist-designer Moki Cherry.

The musical union of Exotic Sin, TYSON, and Neneh Cherry (1964) is a family affair, a rare occasion to affirm the shared inheritance of creative community action inaugurated by their forebears, Don and Moki Cherry, parents of Neneh, grandparents of Tyson McVey (b. 1989) and Exotic Sin’s Naima Karlsson (b. 1982). The clan initially performed together in Copenhagen and Paris (in September 2021), at gatherings celebrating Don and Moki’s Organic Music Society, in conjunction with Blank Forms’s traveling exhibition on the subject, collective happenings that imagined sound as part of an interdisciplinary art practice and as a language reflecting environments both imaginary and real. These performances found the players mixing cosmic improvisation, minimalist sonic landscapes, and enduring (at times, stream-of-consciousness) words from Don and Moki and the late poet Jayne Cortez, a former partner of Ornette Coleman and a confidant of the Cherry family. When apart from the collective, Exotic Sin—visual artist, archivist, and musician Karlsson and multi-instrumentalist improviser Kenichi Iwasa (b. 1977)—also work in the Organic Music Society slipstream, creating instrumental electroacoustic duets that are stark, spontaneous, often humorous, but always emotionally attuned, using Karlsson’s piano miniatures as starting points for leftfield jazz-meets-electronics work reminiscent of Don’s recordings with Terry Riley and Jon Appleton, yet qualified by the organic glitch of modern, digital noise. The pair move freely between tones, cultures, and strategies, open to the possibilities found in contrast, utilizing Don’s trumpet and handmade “zen saxophones” alongside their own synthesizers, celesta, bells, a Yamaha keyboard, and a guitaret, among numerous other instruments and sound-making devices. Naima’s sister Tyson McVey, is a singer of jazz-tinged electronic R&B, and, through her Ladies Music Pub non-profit organization, an activist for women, non-binary, and gender-fluid people working in and around the music industry. Neneh Cherry is a late 20th century icon of artful style and music. Her long career includes stints as a pioneering post-punk musician (a member of The Slits and Rip Rig + Panic), creative partner to the leading lights of Bristol’s electronic dub community, and a pan-global pop star.  In keeping with Don’s legacy, Neneh is a life-long rhythm seeker who continues to collaborate with artists as varied as the free-jazz group the Thing and the electronic producer Kieran Hebden (Four Tet).

Separately and together, pianist and synthplayer Anja Lauvdal (b. 1987) and drummer/percussionist Joakim Heibø Johansen (b. 1987) conjure heavy, heady music out of every consort they join, filling improvisational spaces with collective density and emotional weight. Lauvdal is working with free form on either acoustic piano, organs or synthesizers and is a graduate of the jazz program at the Trondheim Conservatory of Music. She has been a creative force on the experimental music scene in Oslo the past years, and has also lent her support to such Norwegian artful notables, as Jenny Hval and Sverre Knudsen, while collaborating with members of Sydney’s The Necks and London’s Chaos Orchestra. Though stylistically disparate, her projects share a disdain for musical safety, leaning into spontaneity, while exhibiting Lauvdal’s equal comfort with naive acoustic melancholy or digital colorful matter. Though Heibø generally runs in gloomier post-hardcore circles, his drumming has always brought a forward-motion, free-jazz sensibility to the racket he’s made in bands like Ich Bin N!ntendo and MoE, accessing fidgety abstract improvisation, and making broad rhythmic sense of no wave and post-punk atonalities. With those bands and on his own, Heibø has accompanied notable terror-inducing musicians like saxophonists Mats Gustafsson and Martin Escalante, and digital noise deconstructionist Lasse Maurhaug. If the cacophony feels more restrained when Lauvdal and Heibø play together — as they have on occasion since first meeting in 2012 in the propulsive, Pandit Pran Nath-inspired drone-rock collective, mummu — the music is no less substantial. The four pieces on their duet collaboration, All My Clothes (on Smalltown Supersound’s Actions For Free Jazz sublabel) contain echoes of melodious sonorities, and of explosive rhythmic dialogues.

Munchmuseet is fully accessible for those with disabilities.