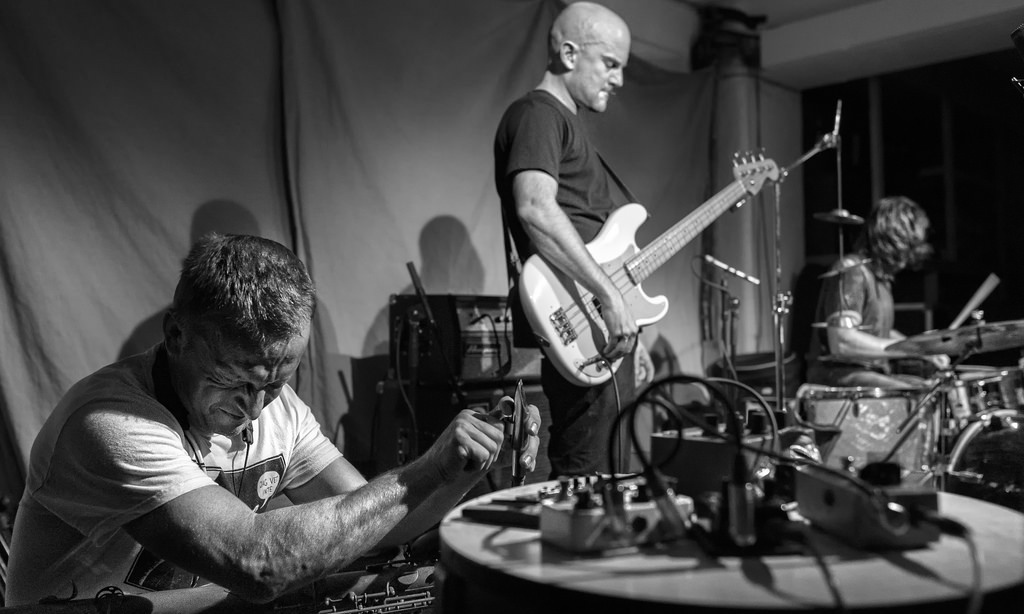 Fire! is the Swedish power trio of Mats Gustafsson (tenor and baritone saxophone, live electronics), Johan Berthling (bass), and Andreas Werliin (drums), formed in 2009 and drawing from the free jazz, drone, and psychedelia of member projects The Thing, Tape, and Wildbirds & Peacedrums to meld ferocious improvisatory skronk with the slow-burning grooves of doom laden ‘70s rock. The group soon joined forces with Jim O’Rourke and Oren Ambarchi, touring and recording albums with each in 2011 and 2012, respectively, before assembling a 28-person ensemble from the fecund spectrum of the Scandinavian avant-garde. The resulting Fire! Orchestra’s colossal jazz ranks among classics by experimental big band forebears like Charlie Haden’s Liberation Music Orchestra or the Peter Brötzmann Chicago Tentet, the latter of which Gustafsson is a veteran. Fire!’s latest, 2018’s The Hands, returns the group to its original formation, with Gustafsson’s anguished sax slithering away atop a rhythm section possessed with the menace of Fun House-era Stooges. By turns delirious and elegant, after 10 years it is clear that Fire! have moved beyond their supergroup status to blaze a voice of their own. This will be their first-ever performance in New York.

Madalyn Merkey (b. 1988) is a composer and performer of live computer music based in Oakland. Responding to local topography, her work—imagined as atmospheric rather than musical—has shifted from woozy hypnagogia towards a spacious probing of time as she has settled from Chicago to the rolling, verdant hills of the Bay Area. Marked by her oneiric use of the vocoder and love of high frequencies, glissandi, and pulse, Merkey’s current output balances deliberate formulation with a playful, alien effervescence, most thoroughly documented on the Scent (2012) and Valley Girl (2014) LPs. She is a graduate of Mills College, where she realized works by pioneering Italian electronic composer Enore Zaffiri as part of her MFA thesis in Electronic Music. Her translation of Zaffiri’s 1968 text Due scuole di musica elettronica in Italia (Two Schools of Electronic Music in Italy) is forthcoming from Die Schachtel.

The Clemente Soto Veléz Cultural & Educational Center is wheelchair accessible via the parking lot on Norfolk St. The space is located two blocks away from the Delancey St/Essex St FJMX stop.