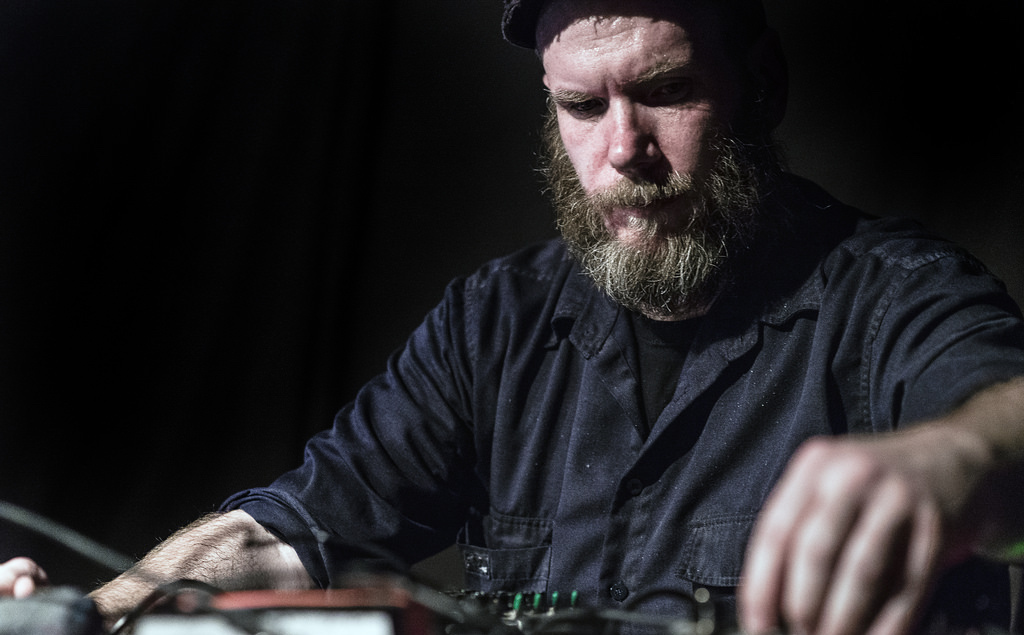 Since his 1997 solo debut, Chicago-based experimental musician Kevin Drumm has demonstrated a mastery over noise, drone, and electroacoustic improvisation idioms, producing a continuum of devastating statements in each field. First coming into his own as a convulsive prepared guitarist, Drumm fell in with Chicago’s vibrant improvising community, playing with Ken Vandermark and Gastr Del Sol as well as participating in the 1998 sessions for Loren Connors’ and Alan Licht’s Hoffman Estates. Incorporating laptop and electronics into his practice, Drumm in 2002 released Sheer Hellish Miasma, a genre-defining colossus of unrelenting, ferocious buzzsaw noise whose aesthetics—cheekily lifted from heavy metal—bely the sometimes-calm interior of its ebbing and flowing feedback. The serenity latent to Drumm’s music was first made explicit with the tectonic drone of 2008’s Imperial Distortion, its spectral pulsations moving with a tranquilizing malevolence, and has frequently reared its luminous head since. Throughout its different modes, Drumm’s work radiates a palpable sense of purity, a steadfastness of vision buttressed by morbid humor and a prankster spirit. Traversing the highbrow/real-deal divide with ease, he has collaborated with the likes of Tony Conrad, Phill Niblock, Aaron Dilloway, Prurient, and Taku Sugimoto and recorded music for Hanson, Erstwhile, Hospital, and Mego. Drumm has been especially prolific in recent years, with 5 releases under his belt already for 2019, but live performances remain few and far between.

Collaborators since 1993, Loren Connors’ and Alan Licht’s hazy, late night howling blues has been well documented, but in 1998 at the behest of Jim O’Rourke, the duo participated in what remains the most ambitious embellishment of their guitars’ elegiac sprawl. With his sights set on channeling Teo Macero’s edit-heavy production work on Miles Davis’ fusion-era records, O’Rourke assembled an all-star group of Chicago improvisers that included bassists Darin Gray and Josh Abrams, clarinetist Mike Colligan, cornetist Rob Mazurek, percussionist Chad Taylor, saxophonist Ken Vandermark, trombonist Jeb Bishop, and guitarists Rick Rizzo and Kevin Drumm, in addition to Connors, Licht, and O’Rourke himself to record Hoffman Estates for Drag City. Connors and Licht arranged the pieces on the spot, a full day of improvising was recorded, and O’Rourke later added overdubs and edited the session into an entangled suite of overflowing guitar feedback, comely brass swells, swaggering ululation, and spacious, mournful intimacy. In celebration of 20 years of Hoffman Estates, Ken Vandermark, Chad Taylor, and Joshua Abrams join Loren Connors and Alan Licht once again to scream the spirit into being.

One of the world’s most singular guitarists, Loren Connors is among few living musicians whose prolific body of work can be said to be wholly justified in its plenitude. On more than 100 records across almost four decades on labels like Table of the Elements, Drag City, Ecstatic Yod, and his own Daggett Records, Connors has wrung distinct shades of ephemeral blues from his guitar, its sound ever-shifting while remaining unmistakably his own. From his early, splintered take on the Delta bottleneck style through his song-based albums with Suzanne Langille and on to the painterly abstraction that defines his current work, Connors has earned the admiration of many, leading to collaborations with the likes of John Fahey, Keiji Haino, Kim Gordon, Thurston Moore, and Jandek.