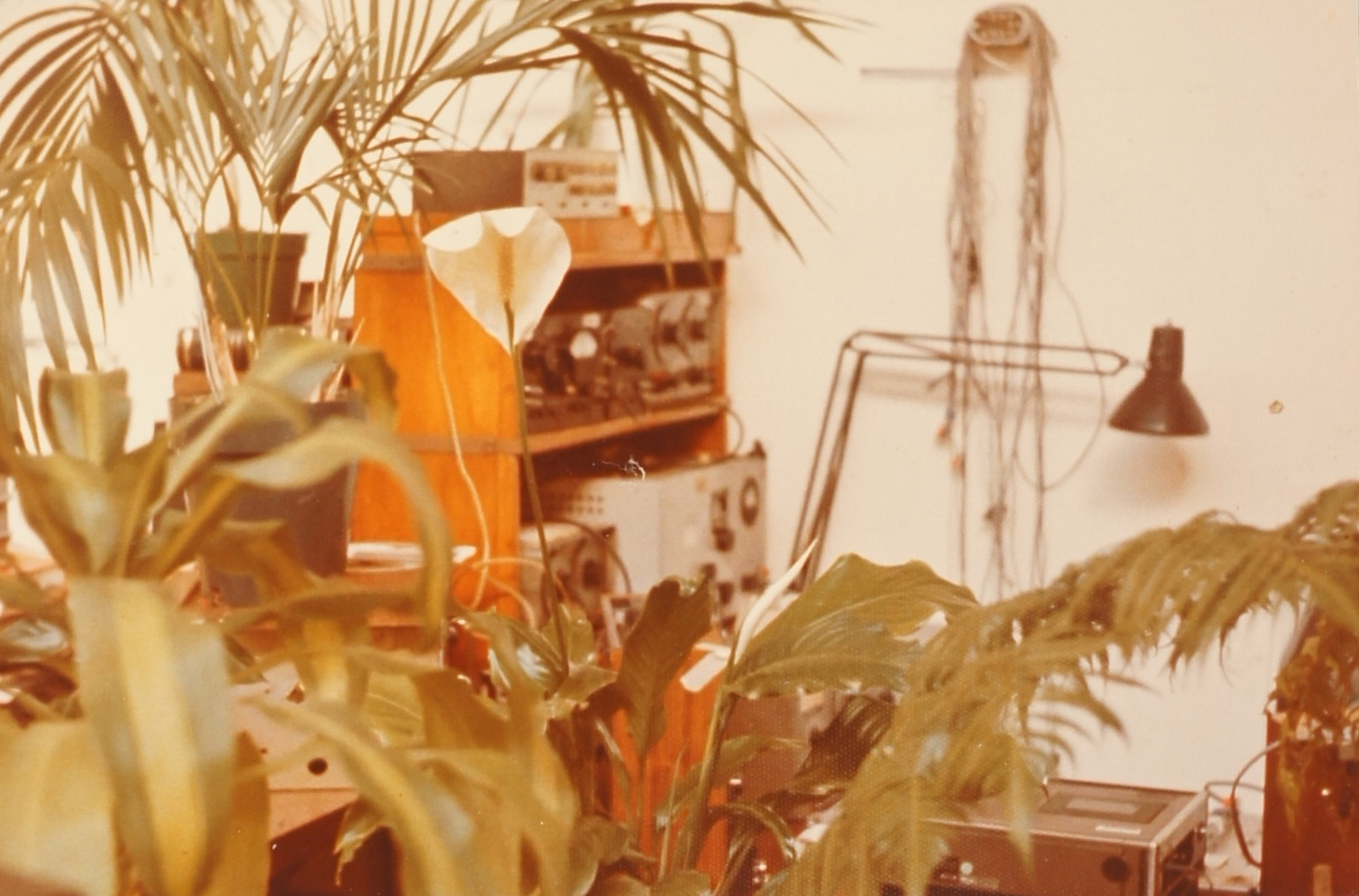 Please note that this event is at capacity.

For a large stretch of the 1970s, Maryanne Amacher was a fellow at CAVS (in its current iteration, the Program in Art Culture and Technology). Her time there and the interdisciplinary collaborations that emerged from it were absolutely formative for her work and thought—not only for the City Links iterations and experiments in “ear tones” that she was working on concurrently, but also for the foundational rethinking of space, virtuality, and staging that would inform her work for the remainder of her life. Working closely with Lowry Burgess, Ernst Caramelle, Scott Fisher, Luis Frangella, and Keiko Prince, Amacher not only produced and showed new work, but also organized exhibitions, drafted unrealized proposals for urban-scale collaborative projects, and co-taught seminars - e.g., the course on “‘Live’ Space,” as cited above, on “[c]ross-sensory explorations between stereo vision and auditory dimension.”

The symposium will focus on Amacher’s work and thought in this particular historical and theoretical context, bringing together her surviving colleagues Lowry Burgess, Ernst Caramelle, Scott Fisher, and Keiko Prince for the first time in decades. Working through the reader provided to the limited group in advance of the symposium, Amacher’s former colleagues will lead visitor-participants through the conceptual, formal, and biographical details of Amacher’s time at CAVS, delving into the arcana of Amacher’s working methodology to reveal the depth of knowledge and study upon which her practice was firmly built. The symposium will ultimately inform a residency, also hosted by Bell Labs—home to the world’s oldest wedge-based anechoic chamber and the site of much psychoacoustic research—for the artist collective Supreme Connections, featuring several of Amacher’s CAVS partners, to develop a new interpretative electronic work based on Amacher’s work in August.

A separate supplementary listening session will follow the next day on March 31st at Artists Space Books & Talks to screen works from the CAVS fellows and present audio documents related or adjacent to the materials and concepts discussed in the seminar to a broader audience.

Maryanne Amacher (1938 - 2009) was a composer of large-scale fixed-duration sound installations and a highly original thinker in the areas of perception, sound spatialization, creative intelligence, and aural architecture. She is frequently cited as a pioneer of what has come to be called "sound art," although her thought and creative practice consistently challenges key assumptions about the capacities and limitations of this nascent genre.  Often considered to be a part of a post-Cagean lineage, her work anticipates some of the most important developments in network culture, media arts, acoustic ecology, and sound studies. From 1972 until 1976 Amacher was a fellow at the Center for Advanced Visual Studies (CAVS) at MIT where she would delve deeper into her research in psychoacoustic phenomena, long-distance music and her burgeoning interest in virtual reality alongside an illustrious group of colleagues living and working in Cambridge that included Juan Navarro Baldeweg, Lowry Burgess, Ernst Caramelle, Scott Fisher, Marvin Minsky, Keiko Prince, Serge and Ivan Tcherepnin.

The task of adequately communicating Amacher’s practice to a larger audience extends beyond the discursive and into the practical, archival, and artistic, insofar as her radical avant-garde project remains largely incompatible with received disciplinary and institutional categories. Due to the often durational and site-specific nature of her work, many audiences have not been exposed to Amacher and her practice, despite her enduring significance. While Amacher’s estate is being settled, with digitization of her materials forthcoming, Blank Forms has decided on our hybrid presentation format in the interim period as a way to collectively and openly think through the material towards the posthumous realization of her work. Seminars and symposiums are limited to a small group of participants to encourage in-depth examinations of material related to specific topics, while listening sessions are open to a more casual audience in order to meet the large public demand for access to the Amacher materials.

Lowry Burgess is an internationally renowned environmental artist who created the first official art payload to be taken into outer space by NASA in 1989, among his many pioneering sky and space artworks. He was a Fellow, Senior Consultant and Advisor at the Center for Advanced Visual Studies at MIT where he created and directed large collaborative projects and festivals in the US and Europe from 1971 to 1989. He is a professor at Carnegie Mellon University where he is a Distinguished Fellow in the STUDIO for Creative Inquiry.

Ernst Caramelle has worked and exhibited in a variety of media, including video, collage, and large-scale installations, since the 1970s. He attracted a new level of acclaim and critical appreciation with the site-specific installation he created for Art Basel in 2011. Caramelle attended the University of Applied Arts in Vienna and was a research fellow at MIT’s Center for Advanced Visual Studies in Cambridge, MA, where he was in frequent communication and collaboration with Amacher, alongside Juan Navarro Baldeweg. Since 1994 he has been teaching at the Karlsruhe Art Academy in Karlsruhe, Germany.

Scott Fisher is Associate Dean of Research for the School of Cinematic Arts at the University of Southern California, where he is also Professor of Media Arts + Practice, Founding Chair of the Interactive Media Division , and Director of the Mobile & Environmental Media Lab. He is an artist and technologist who has worked extensively on virtual reality, including pioneering work at NASA, Atari Research Labs, MIT's Architecture Machine Group (now the MIT Media Lab) and Keio University. Fisher collaborated with Amacher at CAVS, during her residency at Capp Street Gallery,  and other performances.

Keiko Prince was born and educated in Tokyo, Japan. She was invited to join CAVS, MIT in 1971 to work on the Charles River Project -- revitalisation of the then deteriorated river environ as a public open space. Prince was a friend of Amacher’s and collaborated with her at the Centre for Advanced Studies. She conceived Water-Maze, Wind-Belt, Weightless-Tunnel -- (culminating in The Shelter: sun-water dial), these all were generated and transfigured with natural forces, and each had formed as a component of the environ as a sustainable cyclical entity.

Amy Cimini is a violist and musicologist based in San Diego, CA. Her research, teaching and performance engage 20th century philosophy and political thought with an emphasis embodiment and ethics in experimental practice. Her musicological writing appears in GAMUT, Contemporary Music Review, Sound Studies, boundary2, Twentieth Century Music and The Opera Quarterly. She is currently Assistant Professor of Music at UC San Diego and is happy to be finishing her first book, titled Wild Sound, about the musical thought of U.S. composer Maryanne Amacher.

Bill Dietz was born in Bisbee, Arizona in 1983, and has been based in Berlin since 2003. He is a composer, writer, and co-chair of Music/ Sound in Bard College’s MFA program. He was a friend and collaborator of Amacher’s and has led all previous Blank Forms seminars.

This project was made possible by the support of The Andy Warhol Foundation for the Visual Arts and the Creative Connections Arts Fund.