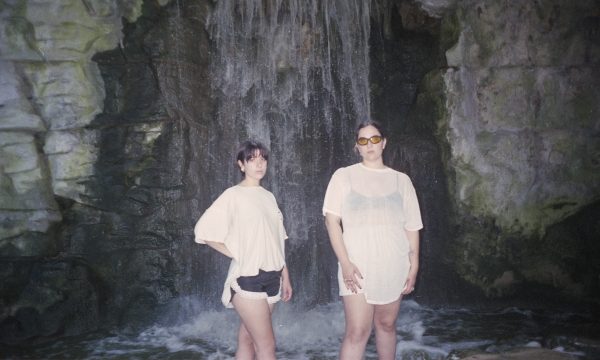 Printed Matter have invited Blank Forms to curate an evening of music for the preview night of the thirteenth annual NY Art Book Fair. We will also have a table all weekend (9/20-23) with copies of our journal, records on Blank Forms Editions, and rare vintage LP stock from Henning Christiansen and Dominique Lawalrée, among others.

Odwalla1221 are the Los Angeles-based collagecore duo of Chloé Maratta and Flannery Silva, who formed as Odwalla88 in 2013 while art students in Baltimore. Having emerged from the city’s warehouse noise scene, Odwalla stitch drum pads, sampler, and voice into a patchwork aesthetic more akin to the legacy of sound poetry. Maratta and Silva’s disjointed arrangement of language enters into cut-and-paste mantra, their deadpan inflections of discrete verbal units repeated for hypnotic reflections—“a / perfect / recipe / for / a / choker / one / ribbon / one / safety / pin / one / carnation / bloom.” Odwalla’s poetic cadence echoes their sampler’s logic, the duo’s mechanical call-and-response chants blurring lines of dialogue between machine and friendship. In their synchronized performances, these permuted utterances and roll-call lists of fashion accessories and sororal allies are jabbed, back and forth together, atop unhinged bursts of stuttered samples for an incisive composite of text and minimal sound that is always unmistakably their own. The creation of merch also plays a central role in Odwalla’s output and both members maintain individual visual art practices, with recent exhibitions by Maratta at Queer Thoughts and Silva at Karma International and Kimberly-Klark.

Roe Enney is the synthesis project of New York-based artist Rachelle Rahme. Her enigmatic, flanger-prone coldwave recordings—reminiscent of The Durutti Column’s rainy day melancholia, Ruth White’s haunted litanies, and The Cure at their most languid—exist in a hazy realm of somnambulant thresholds, “dreaming of elsewhere.” Supported by lumbering bass, rippling guitar, and sparse, driving drum machines, Enney employs synthesizers as a means of solitary investigation into the interstices between electronic and experimental music, enmeshed in a political navigation of both constructed and improvised space. Documented on a number of hermetic cassettes since the project’s inception 10 years ago, the eerie atmospheres of Roe Enney’s hushed, narcoleptic songcraft have most recently been published by Root Strata on last year’s Glare LP.

A veteran of the New York underground, Toshi Moriguchi, aka DJ Monchan, is a heartfelt selector and producer of disco edits and deep house. After moving to the city from Japan in the early ’90s, a visit to David Mancuso’s legendary party The Loft changed Monchan’s life, impelling him towards devotion to the politically progressive, psychedelic music with a message that continues to define his output today. He can usually be found at A-1 Records, where he curates the dance section and operates dailysession.com, an archive of over a thousand in-store sets by an eclectic range of DJs that include Steve Shelley, Frankie Bones, and Tony Humphries. Monchan also hosts the intimate Cedar Room Party and his music has been released by Stilove4music, Downtown 304, and his own Dailysession Records.

Language as Instrument: The Music of Odwalla1221