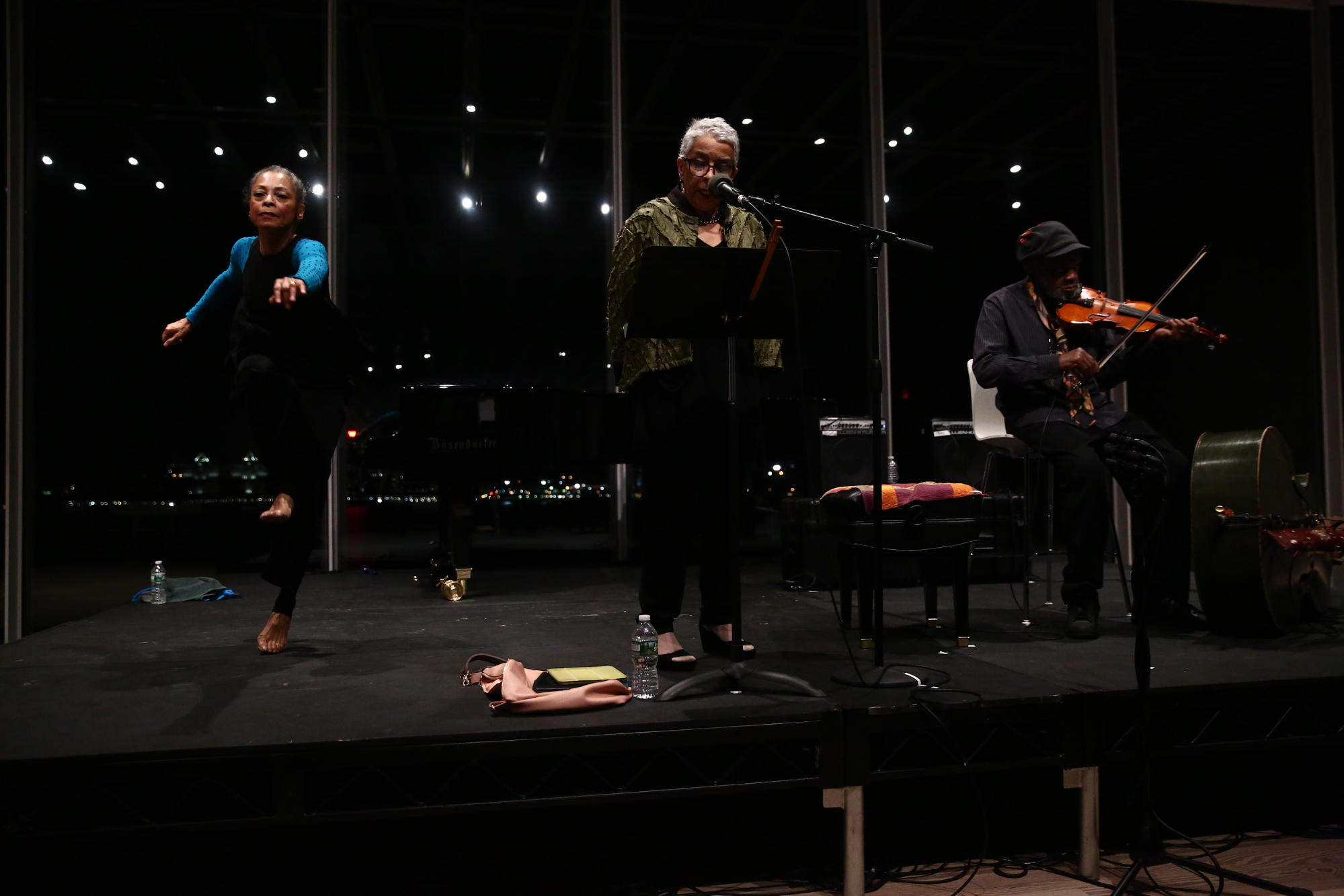 In celebration of Blank Forms’ December 8th publication of Thulani Davis’s Nothing but the Music: Documentaries from Nightclubs, Lofts, Dance Halls & A Tailor’s Shop in Dakar, we have assembled a cast of poets, performers, musicians, academics, and critics whose multifaceted practices are in dialogue, like the myriad forms represented in this volume.

Our livestream book launch will pair Thulani Davis with Tobi Haslett (author of the book’s introduction) for a conversation about this collection of poems documenting the sounds and life of avant-garde jazz, soul, and punk rock in the late ‘70s and ‘80s.

Roscoe Mitchell will play in a duo with Thulani Davis, and, in the spirit of the libretti Davis has written for the acclaimed operas of her cousin, Anthony Davis, Thulani and Anthony will perform, together, while apart.

Now more than ever, Davis’s synesthetic odes both to recorded and live music can transport us—to (head) spaces, gatherings, and intensities whose availability we sometimes take for granted. Daphne A. Brooks, Jessica Hagedorn, Fred Moten, and Greg Tate will read selections from Nothing but the Music, each in their own way summoning the ephemeral energies harnessed by Davis’s voice.

“Her work is a soundtrack for black culture, a record of visionary creativity.” –Terrance Hayes

About Nothing but the Music:

In Nothing but the Music Thulani Davis delivers a collection of transportive documentary poems that breathe anecdotal and impressionistic life into a sonic social history about which most can only speculate. Written between 1974 and 1992, these poems recall the raw feelings, smoke, dawn drunks, and impulsive energies of that moment, without forgetting their inscription into a broader political urgency. Nothing but the Music is further proof of Davis’s place as a crucial figure, alongside poets Jayne Cortez, Sonia Sanchez, and Ntozake Shange, in the cultural landscape of the Black Arts Movement.

Featured musicians and dancers include Cecil Taylor, the Art Ensemble of Chicago, Bad Brains, Henry Threadgill, Thelonious Monk, The Revolutionary Ensemble, The Commodores, MFSB, Dianne McIntyre, Ishmael Houston-Jones, and many more, in performances at historic venues such as The Five Spot, The Village Vanguard, The Apollo, Storyville, and Club Harlem.

With a foreword by Jessica Hagedorn and an introduction by Tobi Haslett.

Order Thulani Davis's Nothing but the Music here.

Thulani Davis (b. 1949) is an interdisciplinary artist and scholar whose work spans poetry, theater, journalism, history, and film. Trained for spoken word performance by Gylan Kain and Felipe Luciano of the Original Last Poets, she has put words to music by Cecil Taylor, Joseph Jarman, Juju, Arthur Blythe, Miya Masaoka, David Murray, Henry Threadgill, Tania León, and others. In the 1970s she lived in San Francisco where she joined the Third World Artists Collective, collaborated with Ntozake Shange, and worked for the San Francisco Sun-Reporter, reporting on stories including the Soledad Brothers trial and the Angela Davis case. When she returned to New York she spent more than a decade as a reporter and critic for the Village Voice. Davis has collaborated with her cousin, composer Anthony Davis, writing the libretti for the operas X — The Life and Times of Malcolm X (1986) and Amistad (1997), and has done screenwriting for the films Paid in Full (1997) and Maker of Saints, and for two award-winning PBS documentaries. In 1993, her essay for Aretha Franklin’s Queen of Soul – The Atlantic Recordings (Atlantic/Rhino, 1992) made her the first woman to win a Grammy Award for Best Album Notes. She is the author of the memoir My Confederate Kinfolk: A Twenty-first Century Freedwoman Confronts Her Roots (Basic Civitas Books, 2006), the novels 1959 (Grove, 1992) and Maker of Saints (Scribner, 1996), several works of poetry, and she is currently an Assistant Professor in the Department of Afro-American Studies and a Nellie Y. McKay Fellow at the University of Wisconsin. Her monograph The Emancipation Circuit: Black Activism Forging a Culture of Freedom is forthcoming from Duke University Press.

Daphne A. Brooks is professor of African American Studies; American Studies; Women’s, Gender, and Sexuality Studies; and Music at Yale University. Well known for her music criticism in The Guardian, The Nation, and the New York Times, Brooks’s merging of interests in black feminist performance histories and popular music has manifested in books as varied as Bodies in Dissent: Spectacular Performances of Race and Freedom, 1850–1910 (Duke, 2006), Jeff Buckley’s Grace (Bloomsbury Academic, 2005) for the 33 1/3 series, as well as her latest—the first installment of a planned trilogy titled “Subterranean Blues: Black Women Sound Modernity”—Liner Notes for the Revolution: The Intellectual Life of Black Feminist Sound which will be published next February by Harvard University Press.

Anthony Davis is a pianist and composer best known for his operas, which include X — The Life and Times of Malcolm X (1986) and Amistad (1997)—both with libretti written by his cousin Thulani Davis—as well as The Central Park Five (2019), for which he received the 2020 Pulitzer Prize for Music. He has performed with Anthony Braxton, Marion Brown, Leroy Jenkins, George Lewis, and Wadada Leo Smith, in addition to leading his own ensembles.

Poet, novelist, playwright, and performer Jessica Hagedorn is the editor of numerous anthologies and author of several books including Dogeaters (Pantheon Books, 1990), winner of the American Book Award and a finalist for the National Book Award, now widely available from Penguin and Open Road. In the seventies and early eighties, she collaborated with Thulani Davis on multimedia performance pieces presented at Downtown Manhattan venues such as The Public Theater and The Kitchen.

Critic and essayist Tobi Haslett has written about art, film, and literature for publications including n+1, the New Yorker, Artforum, and the Village Voice.

Composer and multi-instrumentalist Roscoe Mitchell is a central figure in contemporary music and avant-garde jazz. In 1967 he founded the Art Ensemble of Chicago and he is a founding member of the Association for the Advancement of Creative Musicians (AACM). Playing across the entire range of saxophone, recorder, and flute families, Mitchell often performs with historically neglected woodwind instruments. He is Professor Emeritus of Music at Mills College in Oakland, California.  Earlier this year, Mitchell was named a 2020 National Endowment for the Arts Jazz Master.

Fred Moten’s writing includes the academic volumes In The Break: The Aesthetics of the Black Radical Tradition (University of Minnesota Press, 2003) and the “consent not to be a single being” trilogy (Duke University Press, 2017–18), as well as several books of poetry. His capacious investigations are marked by the appositional consideration of ostensibly disparate figures from the realms of free jazz, popular music, contemporary art, and continental philosophy, as interpreted through the lens of the Black Radical Tradition.

Alongside Thulani Davis, Harlem-based critic and musician Greg Tate was a staff writer at the Village Voice, where he established himself as a revered chronicler of contemporary Black culture. A founding member of the Black Rock Coalition and the leader of Burnt Sugar, Tate’s books include Flyboy in the Buttermilk: Essays on Contemporary America (Simon & Schuster, 1992) and Flyboy 2: The Greg Tate Reader (Duke University Press, 2016). He is the curator of the multidisciplinary exhibition “Writing the Future: Basquiat and the Hip-Hop Generation,” currently on view at the Museum of Fine Arts, Boston.