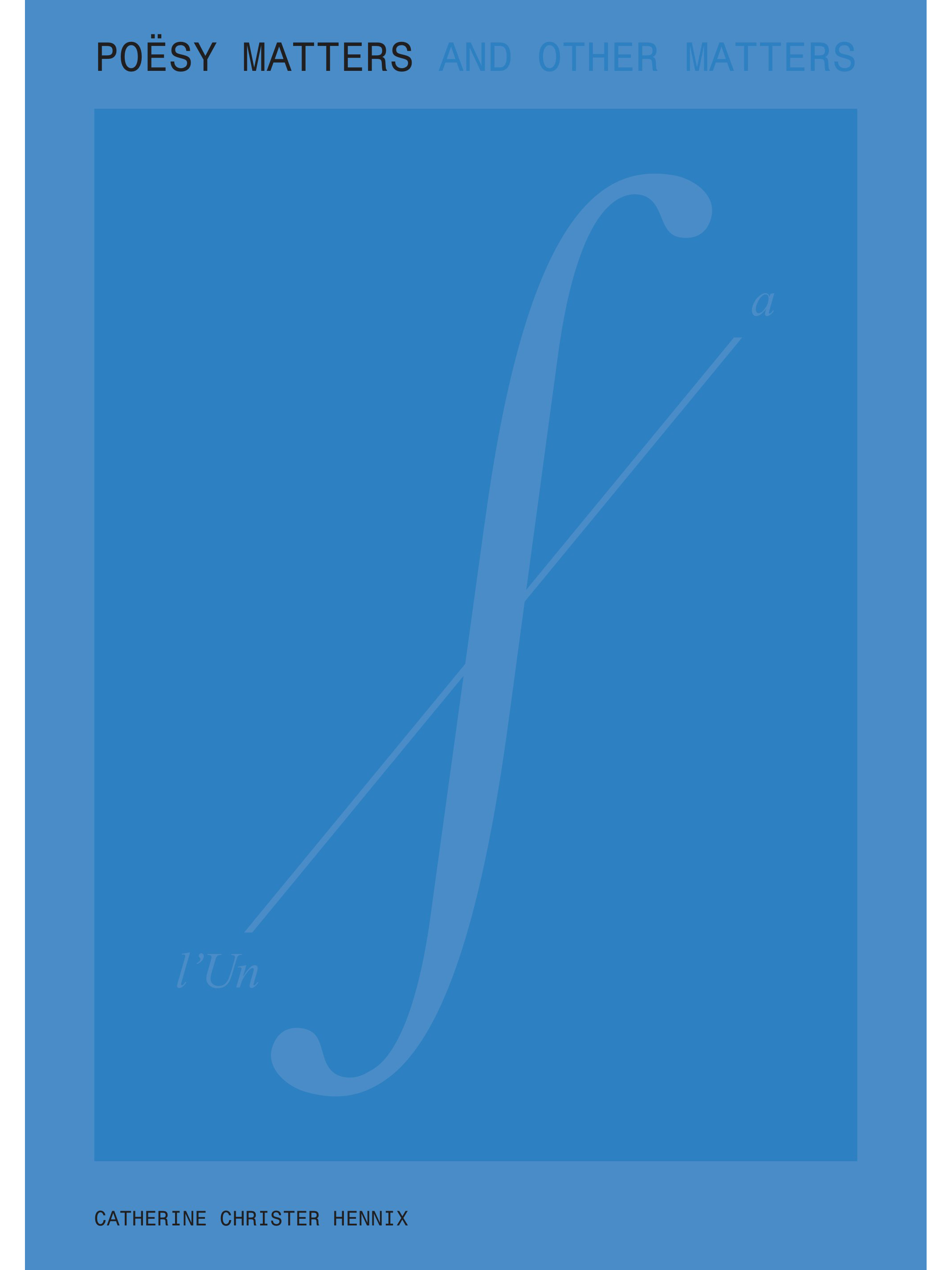 This two-volume set, Poësy Matters and Other Matters, presents selected texts by the Swedish polymath Catherine Christer Hennix. Volume one, Poësy Matters, is divided into two sections: poetry and drama, with each section also containing pieces of commentary by Hennix or her longtime collaborator Henry Flynt. Volume two, Other Matters, is divided into two sections: first, program notes and essays about a wide range of topics (including music, psychoanalysis, and mathematics), and second, a reproduction of Hennix’s 1989 work The Yellow Book. The first comprehensive publication of Hennix’s written work, Poësy Matters and Other Matters illustrates the singular depth and variety of her contributions to contemporary music, art, literature, and mathematics.

Best known as a composer, Catherine Christer Hennix has, throughout her fifty-plus-year career, produced innovative work in the fields of not just minimal and computer music, but psychoanalytic theory, intuitionist mathematics, poetry, and prose as well. Born in Stockholm in 1948, Hennix became involved with the local jazz and electronic music communities while in her teens, meeting visiting musicians such as Eric Dolphy and Albert Ayler, studying with trumpeter Idrees Sulieman, and becoming a member of the Elektronmusikstudio. In the late 1960s Hennix traveled to New York City, where, through Ake Hodell, she met Dick Higgins and, in turn, many other members of the New York avant-garde, including La Monte Young, who would become a formative figure for Hennix and introduce her to both Henry Flynt and her eventual guru, Pandit Pran Nath. In the ensuing decades Hennix has continued to compose and perform music in a variety of formations, including in Flynt’s Dharma Warriors, a quartet with Arthur Rhames, and more recently, with her own Chora(s)san Time-Court Mirage. Hennix’s ongoing explorations of mathematics, meanwhile—namely, the work of L.E.J. Brouwer—have led to teaching positions at SUNY-New Paltz and at MIT, and an extended collaboration with Alexander Esenin-Volpin.

The texts in Poësy Matters and Other Matters reflect Hennix’s diverse training as well as her long-standing personal interests in Lacanian psychoanalysis and Japanese and Middle Eastern poetic forms, resulting in a rich, diffuse collection of writings that reveal one of the avant-garde’s most implacable, not to mention overlooked, creative minds.

Edited, with an introduction by Lawrence Kumpf.

“Although it may at first confound, Hennix’s work, given the deep engagement it requires and deserves, opens up a philosophical and spiritual bounty for her readers. Poësy Matters/Other Matters constitutes a major historiographical contribution to our understanding of experimental music post–John Cage”

“This tremendous collection will allow us, finally, to study the winding paths taken by Catherine Christer Hennix in five decades of virtually peerless exploration. As a roadmap, it promises nothing like answers. Instead, committed readers will find themselves edged further into a limitless space of multiplying questions: a fitting tribute to this bright magus and her luminous worlds.”

“Hennix was among the first to connect constructive approaches in the foundations of mathematics to theories of tuning, minimalism, and art practices of the post-Cage avant-garde. These writings put forward a singular and highly individualistic agenda linking Brouwer’s Creative Subject, Lacanian psychoanalysis, formal linguistics, categorical logic (and more) to the existence of an inexhaustible interior world.”