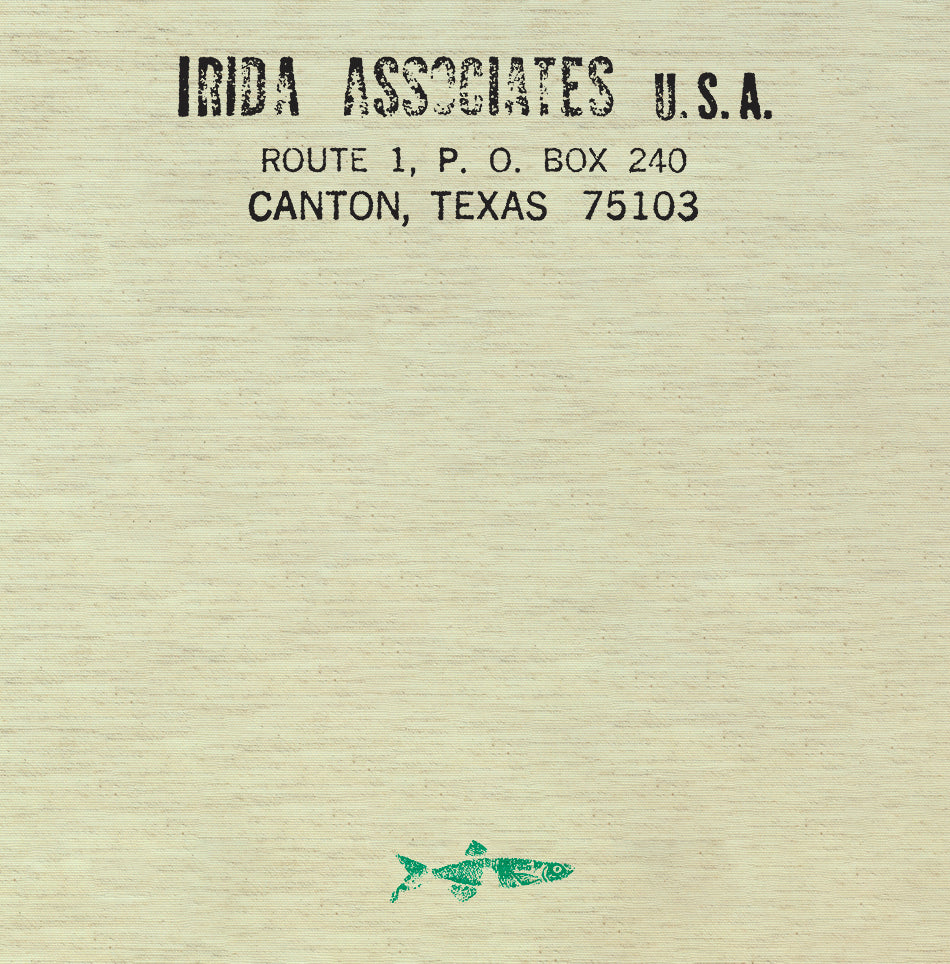 Irida Associates U.S.A., an obscure and short-lived record label formed by composer-performer Jerry Hunt, offers a glimpse into the revelatory world of new music and composition in the artist’s native Third Coast. Based first in Dallas and later in Hunt’s home outside the rural town of Canton, Texas, Irida presented the innovative and daring experiments—into aleatoric methods, environmental acoustics, improvisation, homemade technologies, and more—pursued by Hunt and his select collaborators, primarily working in or near Texas between 1979 and 1986. Irida’s brief and compact output—seven non-sequentially numbered LPs released in unknown quantities—shared work by artists whose practices often challenged the limitations of vinyl recording. Hunt called the label a “vanity project” and frequently talked of a tax loophole he could claim if it all went belly up, but in its short lifespan Irida captured a tremendous period of creative experimentation by the artist and his friends and collaborators.

This boxed set gathers Irida’s complete discography for the first time. These records include early attempts by Hunt to record his generative and highly permutable scores and performances on vinyl in Cantegral Segment(s) 16.17.18.19. / Transform (Stream) / Transphalba / Volta (Kernel), as well as his only composition for piano, “Lattice,” on Texas Music (both records 1979). The label distributed solo and group recordings by those in Hunt’s circle as well, including Larry Austin’s electroacoustic, syncretic compositions in Hybrid Musics; James Fulkerson’s unique, extended techniques for the trombone on Works; a fusion of three overlaid compositions in Dary John Mizelle’s Music of Dary John Mizelle; spontaneous pieces and riff-based “character improvisations” in Music of BL Lacerta by the four piece “orchestra in miniature” BL Lacerta Improvisation Quartet; and experiments in compositional “mapping” by external structures in Cartography, featuring Austin, Gene De Lisa, Robert Michael Keefe, and Rodney Waschka II. Accompanying the boxed set is a richly-illustrated reader with a detailed essay on on the label by Lawrence Kumpf and Tyler Maxin; never-before-published archival materials; newly commissioned reflections by Fulkerson and the composer Jerry Willingham; as well as an interview with Hunt and ephemera including album and concert reviews, artworks, posters and flyers, and correspondences from the musicians and composers involved.

The Irida boxed set is released as part of Blank Forms’s extensive program dedicated to Jerry Hunt. This program includes the first institutional exhibition of the artist’s video and sculptures, Jerry Hunt: Transmissions from the Pleroma, presented at Blank Forms from February 16 to May 31, 2022; the republication of Partners, a memoir-cum-biography by the artist’s long-time romantic partner Stephen Housewright; the forthcoming anthology Blank Forms 08: Transmissions from the Pleroma; and a vinyl reissue of the last record released in Hunt’s lifetime, Ground: Five Mechanic Convention Streams (1992).

Read an excerpt from the 82-page booklet here.